Posted by Dave Clements | Portfolio | Comments Off on ReeWrite

Reedu Taha is a new mother living in Brooklyn who likes to blog about her life experiences, from bringing a new child into the new world, to her love for animals.

Reedu launched ReeWrite.com a few years ago and built up a group of committed readers, but she decided it was high time for a cosmetic change. After sending out a tweet for help, trying to make some changes herself, she decided to hire me instead to make the changes she was looking for.

We settled on a new theme for her site (using the Genesis framework) and proceeded to make some modifications to the theme so that it fit her needs precisely. She was very happy with the results and with her ability to call on me whenever she needed to make changes. She now retains me as an “as-needed contractor”, helping out and making changes whenever the need arises. 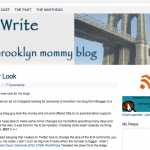 Reedu went for a clean and modern design, while not sacrificing imagery and social networking 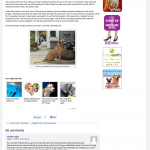 Reedu’s posts give her the ability to post images, videos and hold conversations while keeping her site looking fresh and classy

It was during a recent, nightly head banging that I asked on Twitter how to change the size of the # of comments, you know because I get SOOO many. No really, I don’t, but I do dig how it looks when the number is bigger. I didn’t expect anyone to respond but then Dave Clements of Do It With WordPress Tweeted me down from the ledge. I never figured out how to change the CSS class even with Dave’s instructions but I did begin talking to Dave about going in a new direction with my blog. We decided to move to a different framework and I chose a theme which would allow me to control the majority of fonts, coloring and sizing. So now I’ve got a second blog-guy, one who is extremely accessible and reasonable and I’m really hoping he’ll stick around! If you’re ever looking to do something with Worpdress, or well, Do It With WordPress, definitely contact Dave.